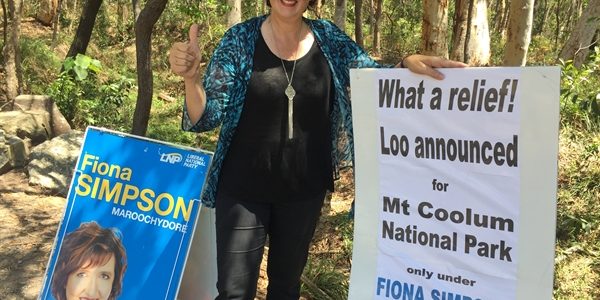 The long wait for a loo at Mt Coolum National Park will soon be over if the LNP win Government at the State Election.

Ms Simpson said that an elected LNP Government would protect the precious natural environment at the iconic Mt Coolum National Park, by providing $250,000 in funding for on-site public toilets and better signage for education, environmental protection and indigenous heritage.

“Local residents have complained to me about visitors going to the toilet in their gardens and in the National
Park,” Ms Simpson said.

“The need for public toilet facilities here is obvious, but this do-nothing Labor Government has refused to listen to our concerns and hasn’t even released the updated management plan it promised.

“Asking mums, dads and kids to walk another 1.8 kilometres from the car park to the nearest public toilet after
they’ve done a return trip to the summit clearly isn’t acceptable.”

Ms Simpson said that visitor numbers to the Mt Coolum National Park had doubled to over 150,000 a year 11ince the LNP Government delivered the $500,000 upgrade to the summit walking track in
2014.

“We want tourists and locals alike to enjoy visiting Mt Coolum but we want to make sure it stays beautiful and
provide more facilities and information about the unique flora, fauna and indigenous heritage in this special area,” Ms Simpson said.

“That’s why the LNP has committed $250,000 to deliver public toilets and other improvements to protect our
National Park, and ensure that future generations can continue to enjoy it and appreciate its importance.”

Ms Simpson said that a vote for anyone other than the LNP will see a return of a do-nothing Labor Government which has neglected the Sunshine Coast.

“Improving the Mt Coolum National Park is all a part of our plan to Build a Better Queensland by building a better Sunshine Coast.”