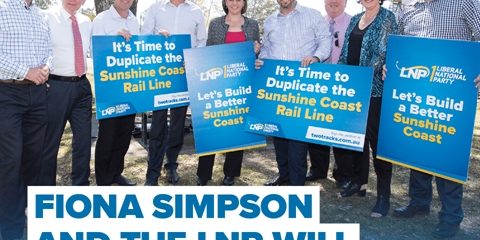 • LNP will build duplicate Sunshine Coast rail line to deliver 150 extra train services, reduce commuting times and ease congestion on the Bruce for locals
• Construction is expected to support more than 1800 jobs
• LNP will commit $300 million and work with the Federal Government to deliver this project

Mr Nicholls said this once in a generation project would be a game-changer for locals with an extra 150 train
services and a faster, more reliable rail trip to and from work.

“Sadly, Annastacia Palaszczuk has been more interested in picking fights with the Federal Government than
delivering real outcomes for Queenslanders,” Mr Nicholls said.

Mr Powell said the 40km line between Beerburrum and Nambour was currently a single rail track which
limited train services to the Sunshine Coast.

“Our commitment will deliver a duplicate line from Beerburrum to Landsborough and restart planning to fix
the line to Nambour,” he said.

“This will ease congestion on the Bruce Highway between the Sunshine Coast and Brisbane by providing
150 extra train services and a more reliable rail alternative.”

“The LNP’s Sunny Coast team have been fighting for the rail duplication and we are proud to be able to
finally deliver it for them,” Ms Frecklington said.

“They know building this project means 1800 local jobs will be supported. They’re jobs not supported by
Labor, who do not want to build this duplication.

“Unlike Annastacia Palaszczuk, we will work collaboratively with the Federal Government and seek a
commitment from their $10 billion National Rail Program.”