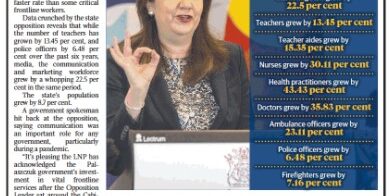 THE Palaszczuk government has hired spin doctors at a faster rate than some critical frontline workers.

Data crunched by the state opposition reveals that while the number of teachers has grown by 13.45 per cent, and police officers by 6.48 per cent over the past six years, media, the communication and marketing workforce grew by a whopping 22.5 per cent in the same period.

The state’s population grew by 8.7 per cent.

A government spokesman hit back at the opposition, saying communication was an important role for any government, particularly during a pandemic.

“It’s pleasing the LNP has acknowledged the Palaszczuk government’s investment in vital frontline services after the Opposition Leader sat around the Cabinet table when the Newman government sacked doctors and nurses instead of employing them,” the spokesman said.

“The proportion of media, marketing and communications staff compared to the whole of government workforce is the same as it was in March 2015.”

But Opposition integrity spokeswoman Fiona Simpson (pictured) slammed the revelation as being typical of a third-term government which was “more interested in how they look than how they deliver for Queenslanders”.

“How is it reasonable to prioritise spin doctors over those who teach our kids, keep us safe from criminals, or put out fires?” she said.

which she defended as necessary because of the Covid-19 pandemic. Ms Simpson accused the government of losing control of critical services.

“We’ve seen it with ambulance ramping with record numbers stuck outside hospitals and yet they’ve employed paramedics at the same rate as spin doctors,” she said.

“The Premier needs to explain why it’s so necessary for her to have so many spin doctors in her office instead of delivering vital services for Queensland.” 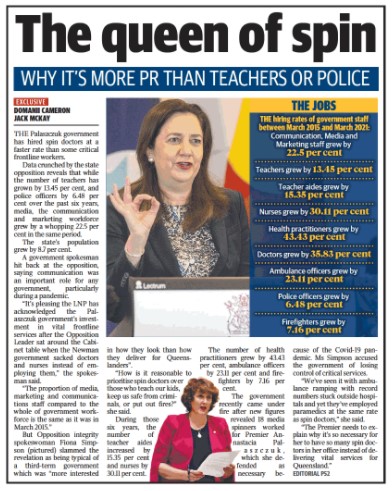