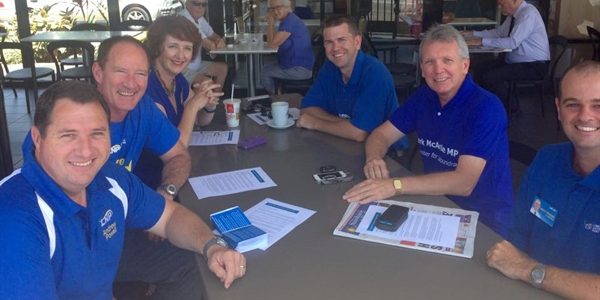 The streets of Nambour were campaign central for the Sunshine Coast LNP team today as four Ministers, the Speaker and Nicklin Candidate Matt Trace threw their collective weight behind the Coast rail duplication.

Andrew Powell, Jarrod Bleijie, Steve Dickson, Mark McArdle, Fiona Simpson and Matt Trace said only the LNP had a plan to create a major infrastructure fund capable of delivering projects such as the rail project.

“We've put our hands up to say the rail line duplication is what together we're fighting for,” they said.

“It's the local LNP team's number one infrastructure priority to unlock the Coast's public transport network and more local jobs.

“The Labor Government pushed back the rail duplication from 2018 to 2031 – but we are lobbying for the project to be brought forward if Queenslanders return an LNP Government and support the asset recycling plan.

“It's new infrastructure such as the rail duplication which becomes possible with our Strong Choices plan to lease some existing infrastructure to cut State debt and release the funds. Thanks to Labor's debt, there is no other way to fund it. We believe it's time to replace old assets with new ones that serve today's needs.”

At the 2012 State Election, the Sunshine Coast LNP MPs' combined number one priority was the construction of the Sunshine Coast University Public Hospital. Thanks to their lobbying, it's now being built and will deliver free public hospital beds from 2016. Work is also underway on the Bruce Highway upgrades which was another team commitment.

“We have demonstrated that as a strong local team who work together, we deliver together for the Sunshine Coast. We can achieve a lot more as a team, than individually as the Coast hospital and the Bruce Highway upgrades have shown. Our hospital is one of the Southern Hemisphere's biggest hospital construction projects and it's going to change the Coast's future as a health capital.

“We also want to see the best public transport network and to achieve that the 1880s single rail line has to be duplicated to connect our region as part of an integrated network.”