Strong reforms ensure a Safe Night Out on the Sunshine Coast 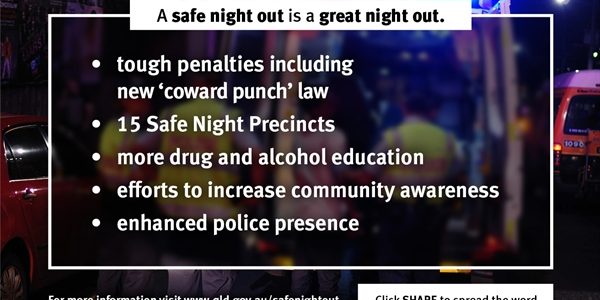 Sunshine Coast residents and visitors will be able to enjoy a safe night out following the nation’s most comprehensive package of reforms designed to help end alcohol and drug-related violence, being passed in Parliament this week.

Member for Maroochydore Fiona Simpson said the Safe Night Out Strategy is the most comprehensive plan of its kind in the country with stronger penalties, targeted action by police, new measures to ensure responsible service of alcohol and initiatives to educate and prevent drug and alcohol-related violence.

“The Sunshine Coast community has had enough of this senseless violence and the Government has heard their concerns and taken action to ensure that bad behaviour is no longer tolerated,” Ms Simpson said.

Ms Simpson said that the Sunshine Coast would also be home to one of 15 Safe Night Precincts thanks to the Government’s $44.5 million funding injection in this year’s State Budget.

“The new Night Safe Precincts will ensure our popular nightspots in Maroochydore and Mooloolaba have locally coordinated prevention and support initiatives in place to keep patrons safe,” Ms Simpson said.

“Venues trading after midnight in the precinct will be required to have ID scanners, which will allow them to effectively ban unruly patrons from any venue in the area.”

“The Government is committed to the preservation of our diverse and vibrant nightlife. The overwhelming majority of Queenslanders do the right thing when they go out and the we want people to be safe and enjoy themselves,” she said.

“These reforms are part of our strong plan to make Queensland the safest place to live, work and raise a family.”

Key elements of the strategy include:

·        Compulsory drug and alcohol education in Queensland schools from Years 7 to 12.

·        A new offence of “unlawful striking causing death”, which will carry a maximum penalty of life imprisonment and require the offender to serve 80 per cent of his or her prison sentence

·        Increased penalties for other violent and antisocial offences such as serious assault of public officers, public nuisance, refusing to leave a licensed premises, obstructing police, failing to obey a move-on order and urinating in public

·        An awareness campaign, including advertising, to promote clear standards of responsible behaviour for patrons, licensees and police