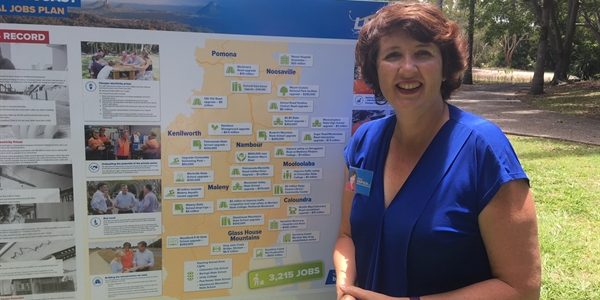 The LNP has a comprehensive plan to build the infrastructure the Sunshine Coast needs Annastacia Palaszczuk has the wrong priorities and has taken the people of the Sunshine Coast for grantedOnly the LNP will Build a Better Queensland by building the roads, bridges and dams Queenslanders need.

Only a Tim Nicholls-led LNP Government has a comprehensive plan for more jobs and delivering cheaper electricity for Sunshine Coast residents.

“We will tackle rising electricity prices by saving families $780 over three years.”

LNP Caloundra MP Mark McArdle said the LNP had a plan to make Queensland the leader in job creation and job security.

“To drive our 500,000 jobs target and help small businesses employ more Queenslanders, the LNP is committed to increasing the payroll tax exemption threshold every year for the next decade,” Mr McArdle said.

“This will mean thousands of small businesses will no longer have to pay this tax and thousands more will see a reduction in their payroll tax bill.”

“We don’t think it’s fair on the next generation of Queenslanders that under Labor our state is battling to be Australia’s jobless youth capital,” Mr Powell said.

“It’s not good enough that full-time youth jobs have fallen by 15,000 and thousands more young people have given up looking for work under Labor.

“There have been 2,300 job losses on the Sunshine Coast in the last year, while more than 4,200 youth jobs have disappeared.”

“A vote for any other party than the LNP is a vote for another three years of doing nothing and a Labor Government that will take Queensland backwards,” Mr Purdie said.