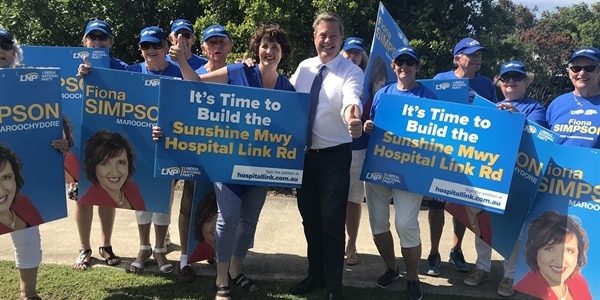 • An LNP Government will invest $215 million to deliver the Sunshine Coast Hospital Link Road
• This critical project will ensure the Sunshine Coast community can access the hospital and will deliver enormous economic and social benefits for the region
• Only the LNP will build a Better Queensland by building the roads, bridges and dams Queenslanders need

LNP Leader Tim Nicholls said an LNP Government would deliver the project to ensure Sunshine Coast residents got the infrastructure they deserved.

“Sunshine Coast residents have suffered from a lack of new infrastructure projects for too long under Annastacia Palaszczuk,” Mr Nicholls said.

“Enough is enough. Only the LNP has the plans to build the roads, bridges and dams Queensland needs.

“That’s why I am committing $215 million to deliver the Hospital Link Road to make it safer for all Queenslanders travelling on our roads.

“By delivering this project, not only will we build the roads Queenslanders need but we will create local jobs.

“It’s because of the advocacy of our hardworking Sunshine Coast team that a Nicholls LNP Government will undertake the upgrade.”

LNP Shadow Transport Minister and Member for Glasshouse Andrew Powell said the LNP would improve access for staff and visitors to the hospital.

“Queenslanders are sick of tired of a do-nothing Government and this is why the LNP listened to the concerns of locals and committed to funding and building this upgrade,” Mr Powell said.

“Instead of sitting around talking about it, the LNP has put its money where its mouth is and will actually deliver it.”

“The Hospital Link Road will provide a new, direct access road to the hospital and reduce local congestion on the coast,” Mr Bleijie said.

“By building this road, an LNP Government will also improve safety at a busy motorway interchange and improve access between Mountain Creek, Kawana and Mooloolaba.

“The local community has been crying out for change, and this is why we have listened, planned and acted to deliver this new piece of road infrastructure.”

Mr Nicholls said an LNP Government would work with the Federal Government to deliver the upgrade and will seek a matching contribution from them.

“Unlike Annastacia Palaszczuk, I will work with the Federal Government to deliver the roads, bridges and dams Queensland needs,” Mr Nicholls said.