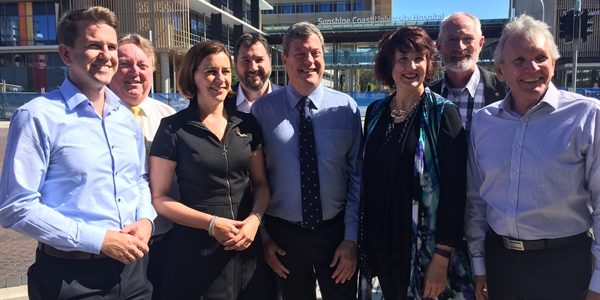 The LNP is calling on the Palaszczuk Labor Government to give some certainty to Sunshine Coast residents and deliver on a raft of much-needed infrastructure projects across the region.

Since coming into Government, Labor has kept residents in the dark on key projects, including the Mooloolah River Interchange and the North Coast Rail Duplication.

It’s clear the asleep at the wheel Labor Government has stopped listening to the Sunshine Coast and has no plan to support one of Queensland’s fastest growing regions into the future.

The LNP leadership team has gathered with Sunshine Coast MPs to call on the asleep at the wheel Palaszczuk Labor Government to finally deliver on a string of much-need projects across the region.

Opposition Leader Tim Nicholls said Sunshine Coast residents had been kept in the dark for far too long over the future of these projects, many of which had been completely abandoned by Labor.

“The Sunshine Coast is one of the fastest growing regions in Queensland yet there are a raft of vital projects that have either been delayed or forgotten about under the watch of the Palaszczuk Government,” Mr Nicholls said.

Shadow Employment Minister and Kawana MP Jarrod Bleijie said the State Government needs to address the Mooloolah River Interchange as a matter of priority ahead of the Sunshine Coast University Hospital opening.

“We have a $1.8 billion hospital opening shortly without adequate road infrastructure and we know the traffic volume will double when it opens,” Mr Bleijie said.

“By the Minister’s own figures, northbound sections of Kawana Way will see a 41% increase in traffic, and southbound a whopping 75% increase once the hospital opens next year.

“Without these upgrades to the Sunshine Coast road network, motorists will continue to experience crippling congestion along Nicklin Way, Kawana Way and the Sunshine Motorway.”

Buderim MP Steve Dickson said it’s hard to fathom why Labor hasn’t prioritised the business case for the MRI upgrade, which would improve safety for motorists and provide better access to one of the state’s largest new hospitals.

“The Premier has admitted that the timing and construction is subject to competing priorities and available funding, but if a commitment isn’t made soon it’s unlikely it will be delivered in time,” Mr Dickson said.

Member for Caloundra Mark McArdle added that further delays to the Sunshine Coast University Hospital were delivering a huge blow to local businesses, who are already struggling to survive because of continual delays.

“Many operators who were anticipating a November opening are now scrambling to make up the short-fall, which will undoubtedly have a major impact on our local economy,” Mr McArdle said.

“It’s time Premier Annastacia Palaszczuk and Health Minister Cameron Dick assured local residents there will be no more delays and that they’re on track for the April 2017 opening.”

“When 23,000 Noosa residents were surveyed last year, more than one third rated the upgrade of Beckmans Road as an urgent priority – yet Labor have made no commitment to the project.

Shadow Minister for Transport and Main Roads and Member for Glass House Andrew Powell said Labor had misled the people of Queensland by turning its back on a commitment to recommence construction of
the North Coast rail duplication from Beerburrum to Landsborough.

“The North Coast Rail Duplication is the number one priority for Glass House residents and will provide a vital service across the region,” Mr Powell said.

“Labor said they could do it without raising taxes, cutting services or leasing assets but since then there’s been
zero action and no sign of a plan moving forward.”

“The expansion will more than double the airport’s capacity and give us access to new domestic and international destinations – which will be a significant boost for our local tourism industry,” Ms Simpson
said.

Opposition Leader Tim Nicholls said it was time the Palaszczuk Labor Government pulled its head out of the sand and finally started listening to the people of the Sunshine Coast.

“Until Labor starts delivering on these key infrastructure projects, one of Queensland’s fastest growing regions will continue to be at a disadvantage,” Mr Nicholls said.