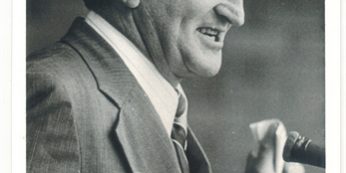 Former member of State Parliament and champion for the Sunshine Coast, Gordon Simpson, has passed away Wednesday (May 10) night at the age of 87, “promoted into the arms of Jesus”, his family has announced.

He left a powerful legacy which imprints the Sunshine Coast and Queensland today during his time serving as the Member for Cooroora, from 1974 to 1989, in a seat that covered half the Sunshine Coast, from Teewah
Coloured Sands on the Noosa North Shore south to the Maroochy River and from north of Imbil to Montville on the Blackall Range.

Gordon Simpson was the man who instigated the historic abolition of death duties in Queensland, the removal of sand mining leases at Sunshine Beach, protected Noosa Spit from development and ensured Noosa's first
town plan was implemented with a ban on high rise.

A passionate advocate for the environment he also drove the expansion and protection of the region's national parks, particularly Noosa National Park.

A natural engineer, he resurveyed the Eumundi-Cooroy rail route convincing the government of a lower cost and lower impact route which is in operation today, saving significant construction and ongoing operational
costs and lessening impacts on people.

He was also among the very first to press for the Sunshine Coast having its own university, a project he first raised in his maiden speech in Queensland Parliament in 1974.

He was responsible for Nambour Hospital becoming the Coast's first proper base hospital and also actively fought for and achieved government investment in many more infrastructure projects, particularly schools and the Coast's first TAFE.

A former wheat and sheep farmer in the rugged and semi-arid Victorian Mallee, Gordon was always an innovator looking for ways to improve things. A graduate of Scotch College, Melbourne, and Dookie Agricultural College, he was made an honorary member of the Agricultural Engineering Society in Victoria due to his design and construction of a revolutionary tractor. He was also made an honorary member of the Grasslands Society for his introduction of a new seed industry.

In 1969, Gordon and his wife Norma brought their young family of four to Queensland’s Sunshine Coast in the search for more opportunities and to be closer to education for their children.  Gordon was a farmer, undertaking dairy, beef and tropical seed production before sugar cane farming at Yandina. He was also a part-time agricultural journalist jointly contributing with his wife, Norma, a rural section for the Nambour Chronicle, one of the predecessor papers for the Sunshine Coast Daily.

First at Cooroy and later at Yandina, Gordon and Norma immersed themselves in community service as they had always done.  After retirement from politics, Gordon did not retire from business, church and community involvement, continuing to serve and support many organizations until recent ill health restricted his activities soon after moving to Buderim early 2016.

For the past 8 months, he fought a fierce battle after being diagnosed with neuroendocrine small-cell prostate cancer.  Norma and family wish to express their sincere thanks for the excellent care of the Sunshine Coast’s Specialist Palliative Care Service and Dr Louise Welch, Blue Care nurses, Selangor Hospital, Sunshine Coast Christian Health Centre, Dr John Reardon and Sunshine Coast Haematology and Oncology Clinic, Anglicare, Comlink and many other fine doctors, nurses and health care workers.

Gordon never retired, he just kept going with care and concern for others right to the end.

He leaves behind his wife of 64 years, Norma, four children, Bruce, Helen, Jock and Fiona, and eight grandchildren.

A public memorial service celebrating Gordon’s life will be held on Monday, May 22, 10 am at Suncoast Christian Church, Kiel Mountain Road, Woombye. A private family service will be held separately.