Call for major roads funding ahead of Labor Budget 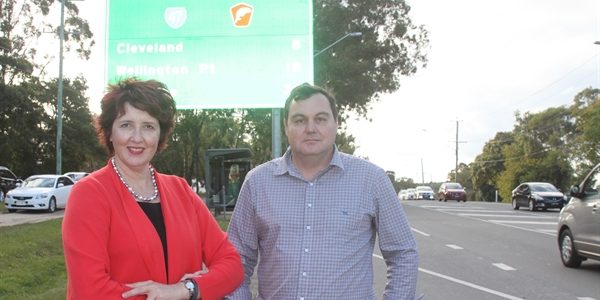 The community campaign to upgrade Cleveland Redland Bay Road continues to gain traction with a call by Shadow Minister for Main Roads Fiona Simpson and State Member for Redlands Matt McEachan for vital funding ahead of Labor’s State Budget next week.

The Shadow Minister visited the electorate to experience firsthand the congestion and traffic Redlanders face every day travelling along the road in peak times.

“This is a critical piece of infrastructure and we want to see the Stave Government commit to a plan for its upgrade,” Ms Simpson said.

“It’s a safety and congestion issue.”

He said Labor’s Roads Minister Mark Bailey has made it clear that funding is reliant on the LNP agreeing to their proposed registration hikes.

“There is no doubt we have a fight on our hands to secure funding but I refuse to allow Redlanders to be held to ransom by the Labor Government.

“I again ask Labor to match the LNPs commitment to fund the Cleveland Redland Bay Road upgrade in their Budget next week.

“Redlanders need and deserve this road upgrade. I appreciate the Shadow Minister taking the time to experience what residents have put up with for far too long.