Wheely friendly office on the way after impasse

Member for Maroochydore Fiona Simpson‘s Electorate Office is moving from near the RSL to new wheel-chair accessible premises in Horton Parade.

Fiona thanked disability advocates who raised the problem about the current office’s lack of wheel-chair access, saying they had been heard.

“It’s true that one dear gentleman’s wheelchair got stuck going into my office which is just totally unacceptable. Also the very steep ramp outside the front door was not compliant and was difficult to negotiate. The good news is that the new office when fully opened in a few weeks’ time will meet the standards for disability access which will be great,” Fiona said.

“In the meantime, the Maroochydore Electorate office will move out of the location on the corner of First Avenue and Memorial Avenue into temporary offices for several weeks from Monday (October 21) until we can make the final move into the new office near QML in Horton Parade hopefully late November.

“Despite this double move, it’s business as usual and people can contact me on the same phone number and email. The only difference is I have no meeting room at the moment so appointments by prior arrangement will be in coffee shops until the new office opens. The coffee is on me.

“People can still contact my office on phone number 5406 7100 or maroochydore@parliament.qld.gov.au to seek help for State matters,” Fiona said.

“The reason for the double move is that the lease at the current office has come to an end and the new office isn’t quite ready yet. However, it will be worth the double move and Marie Kondo-ing of all unnecessary furniture to move our services to a better, more accessible and safer office.” 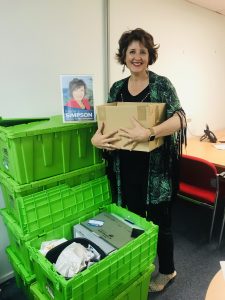