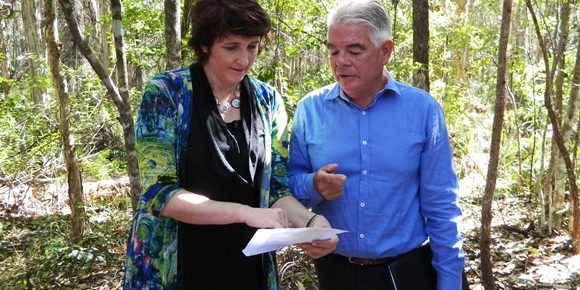 Member for Maroochydore Fiona Simpson has hailed the expansion of a local conservation area as a great win for the environment.

Ms Simpson, who has strongly lobbied with the local community for the move, said the Maroochy River Regional Park was expanding by 15 hectares thanks to the Queensland Government’s decision to incorporate land previously leased by the Novotel Twin Waters Resort.

Located south of Ocean Drive at Twin Waters, the additional land would now provide an important fauna and flora link with the opportunity to both protect high-value vegetation and restore other areas. It would be incorporated into the Maroochy River Regional Park under the Nature Conservation Act 1992.

“I particularly want to acknowledge the work of the Department of Natural Resources and Mines and the Department of National Parks as well as and the other government agencies, local environmental groups and community members who have worked together to achieve this great outcome,” Ms Simpson said.

“The most sizable portion of the land will now be protected for conservation and biodiversity which is great.

“The Novotel Twin Waters resort will retain approximately seven hectares for its use which most visitors to the resort would recall is mainly cleared for car parks and outdoor activities.

“This decision will allow two parts of the conservation area that were previously separated to be connected, providing a continuous conservation area from the Maroochy River shoreline to the area north of Ocean Drive.”

Ms Simpson acknowledged the work of the Mudjimba Bush Care Group and the Coolum and North Shore Coast Care Group, who remove weeds and promote the growth of local native plants in the regional park.

“Local residents and the Mudjimba Bush Care Group have been very keen to see this parcel of land added to the regional park to ensure that it is maintained appropriately and revegetated with native plants. I’m keen to work with the Department of National Parks and the community to see this area protected and improved,” she said.