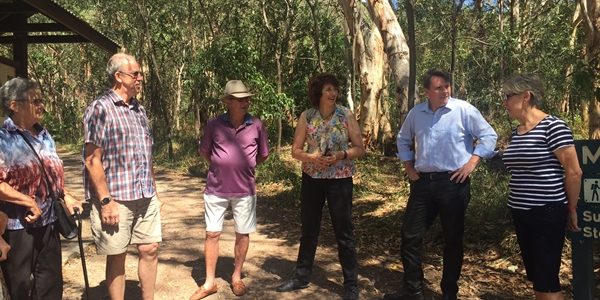 The campaign for public toilet facilities to be provided at Mount Coolum National Park ramped up today with a visit from Shadow Environment Minister to hear first-hand from local residents about their concerns.

Member for Maroochydore Fiona Simpson and Shadow Minister Dr Christian Rowan* met with local residents today to discuss concerns about lack of public toilets and other management issues at our much-loved National Park.

Ms Simpson said that local residents and visitors had complained about lack of toilet facilities at this popular iconic tourist destination and she was asking the State Labor Government to provide these much-needed facilities.

“I’ve sponsored a petition on behalf of local residents and lobbied the Minister to ask for public amenities to be provided for the 10,000 people who climb Mount Coolum every month,” Ms Simpson said.

“There is clearly a need for public toilets at this iconic tourist destination,” Ms Simpson said.

“Last year we had over a thousand people join the petition and local residents are fed up with people going to the toilet in their gardens.

“Instead of doing something about it, the Minister says that people can travel another 1.8 kilometres to the nearest public toilet in Birrahl Park.

“Local residents and visitors are wanting to see action now.”

Ms Simpson said she had invited Shadow Minister Dr Christian Rowan to listen to the concerns of residents and community groups and to hear their suggestions for better management of the Mount summit track.

“The Mount Coolum National Park Management Plan was written in 1998 and it is long over-due for an update,” Ms Simpson said.

“I recently asked a question in Parliament about when this plan would be reviewed and what community involvement would there be.

“Last week the Minister advised that the management plan would be reviewed next year and public consultation will occur in May 2017.

“I am seeking feedback from the community now and have invited the Shadow Minister to hear first-hand from local residents about their solutions for better management of the National Park.

Ms Simpson has invited local residents and community groups to attend a round table discussion forum with the Shadow Minister and representatives of the Queensland Parks and Wildlife Department.

“The need for public toilets is clearly the number one concern we are hearing, but we also want to consider other issues such as an extension to the summit track and better signage to educate people about our
local indigenous heritage and protecting our precious local flora and fauna.”