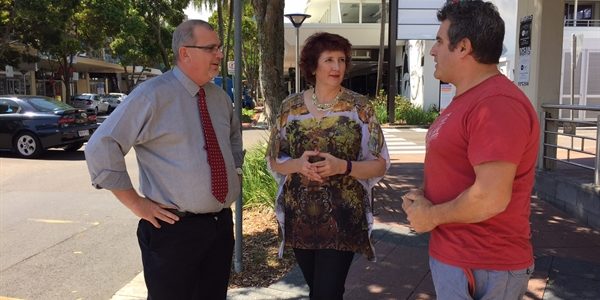 The State Government is being called on to act urgently to fund measures to ensure the safety of the public in popular night spot in Maroochydore.

Member for Maroochydore Fiona Simpson said that the situation was becoming urgent as stakeholders warned that the delay in funding for a taxi marshal and security guard to help facilitate the smooth departure of patrons was becoming serious.

The funding measures have been on hold since the new Labor Government scrapped essential funding for Safe Night Out Precincts while reworking its own strategy.

Eight months after the new Government took office, funding for the Safe Night Out Precinct is still on hold and the busiest taxi rank on the Sunshine Coast is still without a security guard and taxi marshal.

Member for Maroochydore Fiona Simpson said that plans for better public safety measures had been left in
limbo, despite the Police Minister promising months ago that funding was on the way.

Ms Simpson said that $24 million in funding for the Safe Night Out Strategy had been cut from the State
budget, with local venue operators and stakeholders still waiting to hear what the new government would do to tackle alcohol-fuelled violence.

“I have asked the Attorney General to urgently release funding to help keep people safe at this busy taxi
rank and I am still waiting for a response,” Ms Simpson said.

“It’s simply not good enough.  Sadly we have already experienced a tragedy nearby due to alcohol-fuelled violence and we want to make sure that the best strategies are in place to ensure this doesn't happen again.

“Moving people out of a precinct in a timely way at the end of the evening is a critical part of that.  The LNP Government provided funding under the Safe Night Out Strategy and was working with stakeholders to put plans in place to ensure that people can go out, have fun and stay safe.

“Since the new Government took office, all funding has been put on hold and venue operators and taxi drivers are concerned that nothing is being done.

“The rapid growth in popularity of the Maroochydore entertainment precinct has meant that more people than ever before are using the Ocean Street taxi rank and the situation is becoming critical.”

Suncoast Cabs General Manager John Lobwein said that a security guard and taxi marshal were essential for
public safety at the Ocean Street Taxi Rank on busy nights with groups of intoxicated people queuing for a cab.

“This rank is a ticking bomb,” said Mr Lobwein.

“I’m concerned that there will be a major incident in the busiest precinct on the Coast before Christmas.

“The consequences of such will affect everyone – not just Ocean Street traders.”

Safe Night Precinct Chair Marcus Shimbel said that the Sunshine Coast committee had applied for funding
to pay for a security guard and a taxi marshal earlier this year under the LNP’s Safe Night Out Strategy but this funding had been put on hold when the Government changed in February.

“We were told that funding was available and we put in an application, but the new Government has told us
that this is now on hold and we don’t know when the funding round will open again,” Mr Shimbel said.

“The Police Minister visited the Sunshine Coast in May and told us that funding was on the way but it still
hasn’t happened.

“Venue operators are trying to do the right thing to keep people safe but we’re being given the run around.”