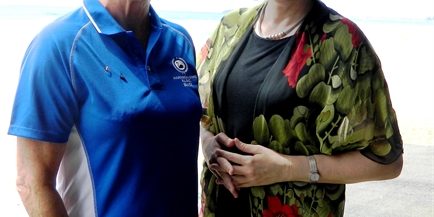 The awards were initiated to honour women who strengthened individuals or communities in the area of business, community service, the arts, the environment or another arena. This year the focus was on honouring Women of Generosity.

State Members of Parliament from across Queensland were invited to select an inspirational woman from their electorate to receive an award. Women gathered at Queensland Parliament House from as far away as Mount Isa Electorate to be honoured.

Speaker Fiona Simpson said she was deeply impressed by the generosity and service of award recipients.

“These awards honour women who demonstrate a spirit of generosity, whether through a particular initiative or through a lifestyle of encouraging service to others. It is a great privilege on the eve of International Women’s Day to host some very inspiring women and celebrate the contributions they have made to our State,” she said.

The award recipient for the Maroochydore Electorate was Narelle Souter of the , Maroochydore Surf Life Saving Club.

“Narelle has served our community for the last 15 years as a dedicated member of the Maroochydore Surf Life Saving Club both on the beach, as patrol captain and at Board level,” Ms Simpson said

“Over the last 25 years she has actively supported the wonderful work of Surf Life Saving Australia to keep our beaches safe.”

“Narelle has been recognised with a number of Surf Life Saving awards including the highly prized Commonwealth of Australia National medal and she has a strong commitment to training and encouraging others.”

“The Maroochydore Surf Life Saving Club will no doubt continue to benefit from Narelle’s lifestyle of service to others for many years to come.”