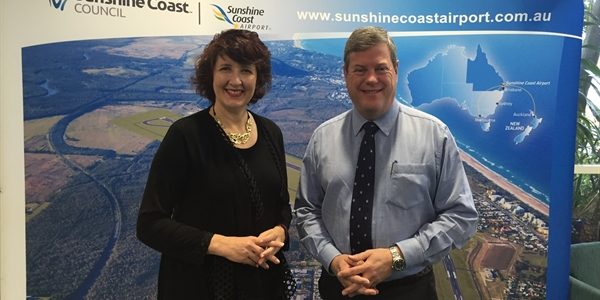 State Member for Maroochydore Fiona Simpson has welcomed today’s announcement by the Leader of the Opposition that a future LNP government would act as guarantor on a concessional loan worth over $100 million to build the new runway at the Sunshine Coast airport.

The agreement was secured following a visit by Mr Nicholls and Deputy Opposition Leader Deb Frecklington to the airport last week organised by Ms Simpson and the Sunshine Coast MPs.

“The LNP has always been a strong supporter of the New Runway project at the Sunshine Coast airport,” Mr Nicholls said.

“Today’s commitment that a future LNP government would underwrite the Sunshine Coast Council’s bid for a concessional loan from the Federal Government ensures one of the final hurdles to this critical project would be overcome,” Mr Nicholls said.

“The LNP knows just how important this airport upgrade is to the Sunshine Coast economy, especially its capacity to provide over 1,500 long-term jobs for Sunshine Coast locals.

“I have written to Sunshine Coast Mayor Mark Jamieson following our visit to region to assure him that, if elected, the LNP would happily act at ‘guarantor’ on a federal loan.

“I’ve also let the Mayor know that I stand alongside local LNP MP’s in challenging Treasurer Curtis Pitt to make the same commitment – and fast.”

Maroochydore MP, Fiona Simpson said she was thrilled with the Opposition Leader’s pledge, after she and other Coast MP’s had lobbied for so long on behalf of their region for a project that is expected to provide a $4.1 billion boon to the local economy.

“The LNP understands that this new east-west runway will allow larger, longer-haul planes to land on the Sunshine Coast, more than doubling the airport’s capacity to two million people by 2030 and delivering a massive boost to the local tourism industry.

“Civil Aviation Safety Authority rules mean the current runway will not be able to operate beyond 2020 making it even more important this project gets off the ground.

“Today’s promise shows the LNP is streets ahead of Labor when it comes to driving job-creating infrastructure projects that kickstart regional economies.

“Only the LNP has the capacity to work with our Federal Coalition counterparts to ensure residents of the Sunshine Coast get the airport they deserve.”

When in government, the LNP provided the following key support to the New Runway Project at the Sunshine Coast Airport:

The gifting of three parcels of land required for the New Runway Project to the Sunshine Coast Regional Council, at no cost to Council

Amending the State Planning Regulation to exclude infrastructure on airports, and ancillary works from any development assessment referral under the Vegetation Management Act 1999.