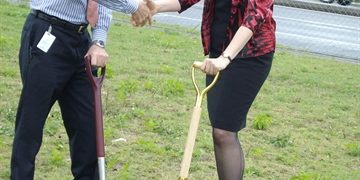 Work is set to kick off from next week on the new Maroochydore bus station near Sunshine Plaza.

Member for Maroochydore Fiona Simpson today turned the first sod to signal the start of works for the new bus station, near the Cornmeal and Sunseeker Parade intersection.

“This is a significant investment in public transport infrastructure on the Sunshine Coast, and will be a boost for the local economy,” Ms Simpson said.

“The overall cost to deliver construction of this project is $7.1 million.  This will deliver a modern, high-quality facility for commuters with better access to services and improved bus service reliability.

“It will create a new transport hub in the heart of Maroochydore and provide commuters with convenient access to Sunshine Plaza and other nearby shopping facilities.”

Ms Simpson said construction of the new bus station was expected to be completed by late 2013.

“The station will include three bus bays on either side of Horton Parade with new bus shelters to provide commuters with seating, lean rails and passenger information,” she said.

“It will be equipped with 24-hour security cameras, improved lighting, secure bicycle storage and end-of-trip facilities such as showers and public toilets.

“Sunshine Coast Council is a key partner, contributing $2.5 million for the project to providing a public plaza and art piece reflecting the natural surrounds of the bus station.”

“The improved services and the safe, high-quality waiting facilities will encourage more people in our region to use public transport and reduce congestion in Maroochydore,” Cr Baberowski said.

“This project also highlights the importance of strong working relationships between the state government and council, particularly on transport infrastructure.”

Golding Contractors were awarded the contract to build the new bus station. The existing bus station will remain operational until the new bus platforms are opened towards the end of construction.

TransLink will tell passengers in advance of any changes to their local bus services during construction.