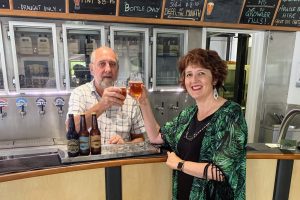 After popular craft breweries were slugged a near 10-fold tax hike in early July, they are celebrating a reprieve with the withdrawal of the increase in Queensland Parliament.

However, she said the now dumped increase which businesses had to pay without warning from July 1 had caused a lot of financial and emotional stress for many.

“Cheers to a win but this 900% increase in the tax should never have happened in the first place. The State Labor Government was dodgy and dishonest in how they tried to hit these small businesses over the head with this tax hike and then blame council,” Ms Simpson said.

“This week the State Labor Government backed down and withdrew the offending tax regulation which had seen brewers, such as Sunshine Coast Brewery’s Greg Curran, facing up to a $4000 increase in their fees. That’s big beer for small business.

“Depending on their floor size, most small craft brewers will now return to their previous fees.

“For bigger brewerers, the detail still has to be released to provide that certainty and I’m calling on the State Government to come clean and consult before they do this stunt again to avoid the pain and instead support local businesses and jobs.

Under the now dumped regulation, craft brewers in urban areas saw their State Government emergency management levy rise from $527.80 a year to $5224.20 this year.