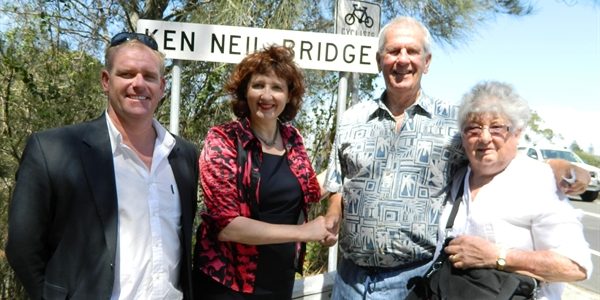 A local man’s contribution to the Sunshine Coast community was recognised today with the Bradman Avenue bridge over the Maroochy River being renamed in his honour.

Member for Maroochydore Fiona Simpson unveiled the signs at a special ceremony  to mark the renaming of the bridge to Ken Neil Bridge.

“This is an excellent way to recognise Mr Neil’s continuing contribution to a wide range of sporting organisations on the Sunshine Coast,” Ms Simpson said.

“The bridge and foreshore area have special significance for Mr Neil and his family who have supported a range of water sports and athletes.

“Mr Neil’s contributions have shaped the active lifestyle so many people enjoy on the coast including allowing the area under their house to be used to store boats and equipment.

“While Mr Neil is semi-retired he maintains an involvement in many community and sporting organisations.

“He’s been a driving force behind many projects that have shaped sport and recreation on the Sunshine Coast.”

Mr Neil and his wife Desley had been Bradman Avenue residents for more than 50 years.  Mr Neil has spent 55 years in the electrical and building industries and has been heavily involved in the local property development.

The Bradman Avenue bridge in Maroochydore is a three-span concrete structure built in 1960.  The bridge crosses the canal at the eastern end of Bradman Avenue and in recent years the balustrades were upgraded to improve the safety for cyclists and pedestrians.

The Ken Neil Bridge is among a string of transport structures renamed in the past few years to recognise the people and history that make up the Sunshine Coast region.

The Six Mile Creek Bridge on Beerburrum Road at Elimbah was re-named the Hammond Bridge in 2009; Belli Creek Crossing No. 2 on Eumundi–Kenilworth Road was renamed the Murrays Flat Crossing; and the East Eudlo Creek Crossing on Maroochydore Road re- named the Hungerford Bridge.

Ken Neil has guided the progress of many sporting organisations including: