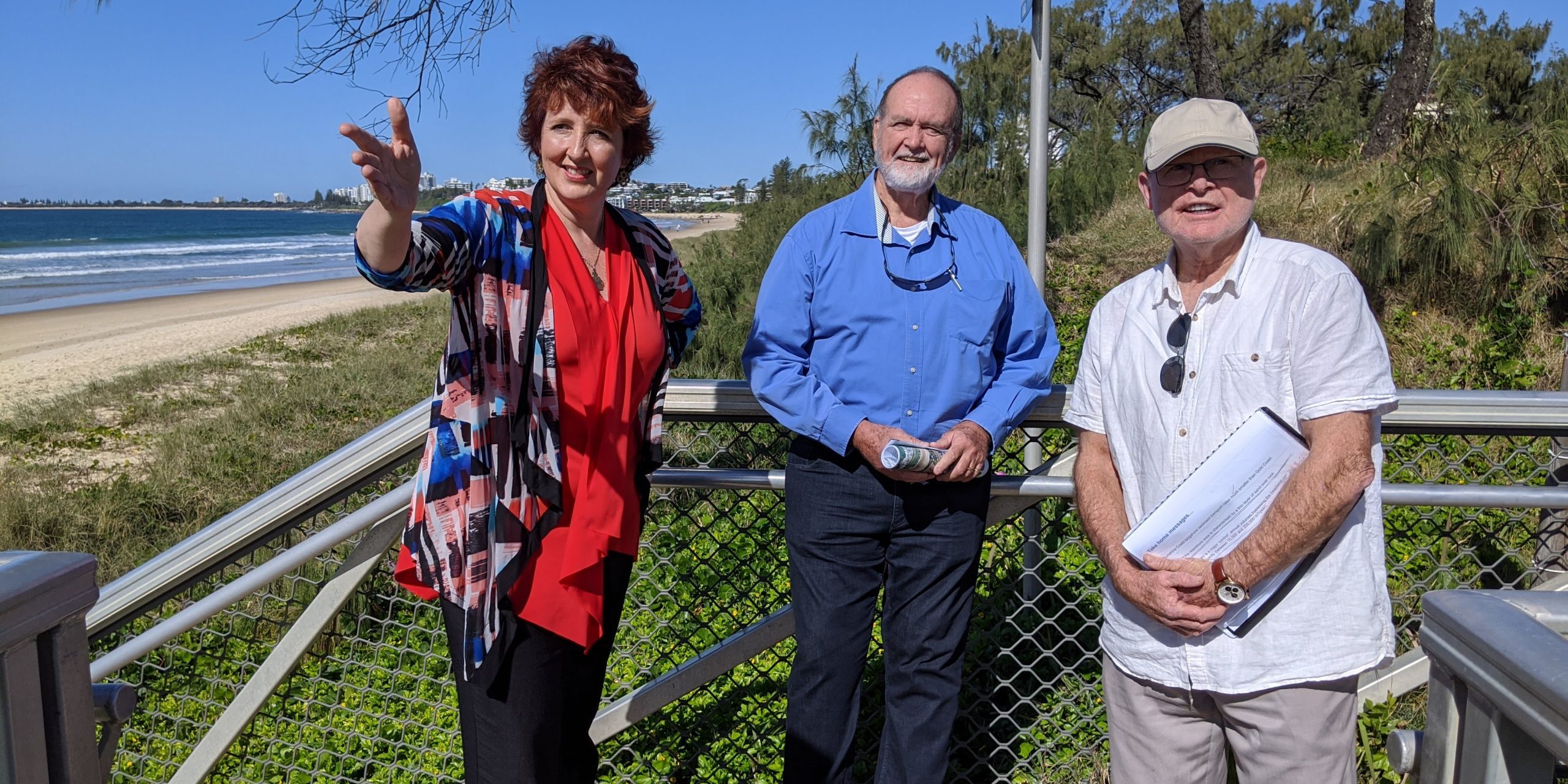 There is no doubt we need to protect the fragile dunal system between Maroochydore Beach and Alexandra Beach AND we need bike paths – but the two need to be planned together.

The Transport Minister is pushing ahead with plans to build the controversial M2M cycleway at Alexandra Headland next to one of the narrowest dunal areas on the Coast.

The Public Consultation period for the planned route ending this month (31 July) – but I have slammed the plan, pointing out it does not properly take into account the Sunshine Coast Council’s planned Rock Seawall or in fact the impact of the future proposed light rail.

The cart is before the horse. This is preposterous! I bet a lot of people don’t even know about the Rock Seawall and where it is planned to be built. I know the surfers and other community members are concerned. But by locking in the cycleway design, you may be locking in the wrong solution or location for this seawall in a very fragile area. The community successfully fought against a planned rock wall at Cotton Tree – no doubt this will be another fight in the future if concerns aren’t taken on board about whether this is in the right location or whether in fact it is the right solution.

But the issue today is: We need to “Pause and Rethink the Cycleway” until all cards are on the table. How can people be expected to make a proper submission on the cycleway project without all the information about other plans for Alex like the location of the Rock Seawall and possible future 8-metre wide light rail corridor through a location next to one of the narrowest dunal areas on the Coast.

We need everything on the table to develop a comprehensive and cohesive “Plan for Alex” to keep Alex safe and great – it’s too important to mess up and get it wrong by putting the cart before the horse.

We need to get it right and for the State Government and Council to consider all the issues before choosing a cycleway route through Alex which has such hugely negative impact on safe beach access for a number of reasons such as loss of beach-side carparks.

The “Plan for Alex” needs to look at the location of any proposed rock seawall between Maroochydore and Alexandra Headland beaches, the cycleway, pedestrians, surfers, swimmers and beach goers.

If we get the cycleway wrong and have to move it later, the costs will be horrendous both financially and environmentally! What if it’s better to have the cycleway or bike and pedestrian pathways along the potential Rock Seawall or alongside it instead of where it’s going now?

We need robust and interactive community engagement upon which to base future recommendations which rightly reflect the environmental, cultural and social significance of Alex. We need coastal experts and engineers to examine the best options to protect our dunal system and infrastructure AND to build bike and pedestrian pathways in the right spot.

This needs to be an open and transparent process instead of vital decisions being made in a piecemeal approach behind closed doors – all issues need to be considered together and the community needs to be consulted.

Let’s “Pause and Rethink” this!

I will be hosting a Community Corner at Buhk Park near the Alexandra Headland Surf Club this Saturday, July 4 10.30-11.30am to show people more about this issue and talk to locals first-hand to find out what they want for their beach.

What is this Alexandra Headland to Maroochydore Seawall?

Sunshine Coast Council plans to put a buried rock seawall from Alexandra Headland to Maroochydore Beach to protect infrastructure from erosion if “trigger points” are met.

This has also been called the “last line of defence” and was part of Coastal Adaptation Strategic planning first undertaken several years ago.

However most of the public has not been consulted about where this seawall will go exactly or about plans for sand replenishment.

There is a concern that the proposed alignment of the rock seawall is too far into the active beach area, which will affect the dunal process and impact the beach with future beach goers looking more often at rock walls than sand dunes.

While the construction of the Seawall construction wasn’t imminent, the need to revisit its planning has become urgent in light of the M2M cycleway project being proposed in the same locality, along with a possible light rail corridor.

I am saying that all these issues should be planned together with full public consultation and transparency so the best decisions are made and not compromised by a piecemeal approach.

This is a very vulnerable area with one of the narrowest sections of coastal dunes.

Making the right choices of how to protect the beach and infrastructure requires great care with all the facts on the table.

However currently the push to build the cycleway through this constrained area is not taking into account all the strategic issues and may undermine the best choices for coastal adaptation in the future.