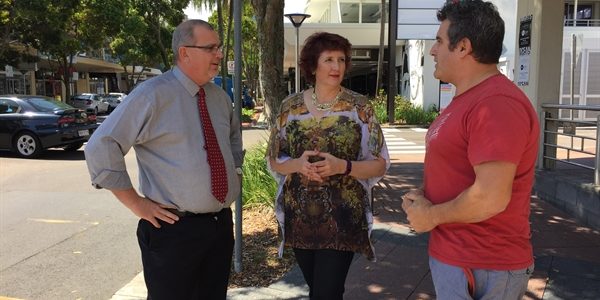 Ongoing State Government funding has finally been provided for a taxi marshal at the busiest taxi rank on the Sunshine Coast in response to lobbying on behalf of the local community by Member for Maroochydore Fiona Simpson.

Ms Simpson has been calling on the Government to fund better public safety measures at the popular Ocean Street night spot in Maroochydore since the new Labor Government put the LNP’s Safe Night Out program on hold when it took office.

Ms Simpson met with the Attorney-General in October in response to calls from Suncoast Cabs, venue operators and the local community for urgent funding to provide better security following a violent alcohol-fuelled attack at the taxi rank.

“I am pleased to report that funding was finally provided in December so that a taxi marshal could be in place from 10pm to 4am on Friday and Saturday nights over the busy holiday period and this is ongoing until the end of this year,” Ms Simpson said.

“Moving people out of a precinct in a timely way at closing time is a critical to ensuring people can go out, have fun and keep safe.

“Local taxi operators had described the Ocean Street taxi rank as a ticking bomb, expressing concerns that there would be major incident in busiest precinct on Coast before Christmas without the funding. I'm glad that the work of local taxi operators, venue operators and police to keep people safe has been acknowledged.”

Ms Simpson expressed her sincere condolences to the family of Cole Miller who tragically lost his life following a cowardly one-punch attack in Brisbane.

“My thoughts and prayers go out to the Miller family at this incredibly sad time,” Ms Simpson said.

“Violence on our streets, or anywhere, is simply unacceptable.

“We need to work together as a community to challenge the culture of binge-drinking, violence and unacceptable anti-social behaviour.”